Bigger on the inside

Daughter: I want a superhero party.
Dad: So, like Superman.
Dad: Superman uses a phone booth
Dad: Dr. Who has a cool phone booth.
Dad: I'll build a Tardis.
Daughter: Who is Dr. Who and what does it have to do with superheroes?
Dad: Shhhh. Let daddy work.

I really had no good reason to build a Tardis, except, well, to have a Tardis in the house. The kids did need some place to suit up into their superhero costume, which included a mask and a cape we made. In all honestly, I know they could have just gone behind a curtain, but who passes up an opportunity to build a Tardis? 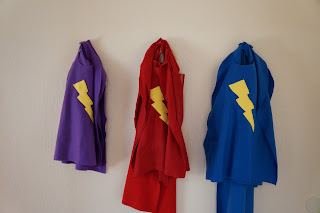 Having a huge refrigerator box really helped as a skeleton for the project. I wish I could say that I planned the whole thing, but I really just started slapping scrap wood onto the box until it started to look like something. The wood strapping was the cheapest thing I could find at Home Depot, I always keep some around, though in this case I had to stock up again. 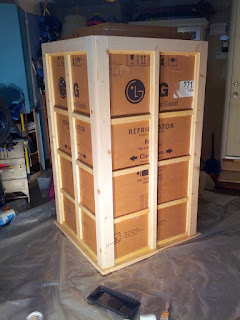 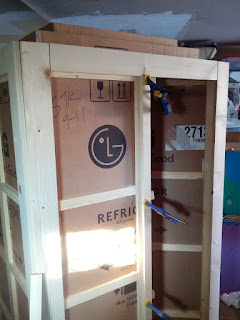 I knew from the beginning that I'd have to assemble it in the garage and move it into the house at some time. So, I took some extra steps to make sure two corners could open and the other two could collapse, which let me then fold the box flat-ish to get it through doorways. It was like having a bigger space fit into a smaller size, i.e. it was bigger on the inside than the outside... 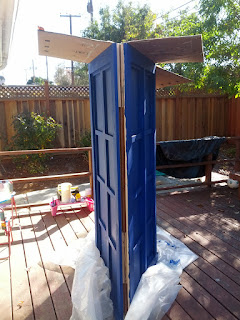 Getting cheap paint was much easier than I thought. I was able to talk to the guy working at the paint counter to mix in some blue into a "clearance/returned" can. I wasn't able to guarantee a "Dr. Who blue", but for only a few bucks I was able to get a high quality paint that did turn out pretty close to perfect. 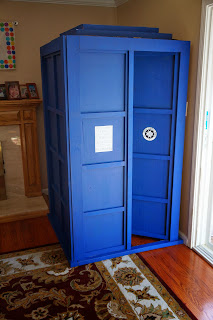 Side story: While I was working on the Tardis, the wife was off sewing capes, creating a bunting banner made out of old comics and creating a city backdrop to stand in front of for pictures. I was very impressed and it made for a great themed birthday. 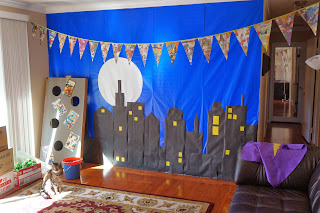